You are here: Home / News / Zlatan the Majestic 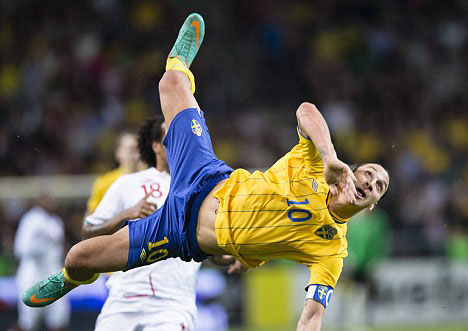 The player, Zlatan Ibrahimovic, has always been somewhat special. However, he often chose his moments to show his brilliance when the occasion was afforded by him.

Fortunately, last night was one of those unforgettable occasions, which has boosted him into the world’s psyche with a wondergoal.

The goal came well into injury time of Sweden‘s friendly with England in their opening of the new indoor stadium in Stockholm, named the Friends Arena.

The superlatives are bound to be placed on the tall Swedish captain regarding the brilliance of his 4th goal however the 3 before were of an extraordinary manner as well, so we can without doubt say that these are the most amazing sequence of goals in international football history.

Let’s not waste our time here debating, instead let us see the brilliance in each goal scored.

He had to work to get his first and finished with the aplomb of a deadly striker on top of his game.

Then came the 2nd, a touch of perfection when brushing aside Ryan Shawcross of England to take the ball on his chest and in one easy display of further brilliance he blasted the ball past Joe Hart in goals.

The 3rd goal was the least spectacular however when considering the nature of the free-kick where he drove the ball low into the right side of the goal bamboozling the England keeper again, who was no doubt expecting the ball to come airborne.

Make no bones about it, this goal was brilliant in itself .

Then what was to follow was absolutely outstanding when considering the size of the player; 6ft 5 or 195cm and 95kg, being able to launch himself into the air to create the opportunity in the first place. It would be easy to dismiss this as a fluke however not so when it comes to this enigma of a man who is a bag of tricks. And tricks he is willing to ply week in and week out, sometimes to the dismay and annoyance of his managers and coaches.

Well done, Zlatan Ibrahimovic, for providing us with an evening to remember and goals to savour.