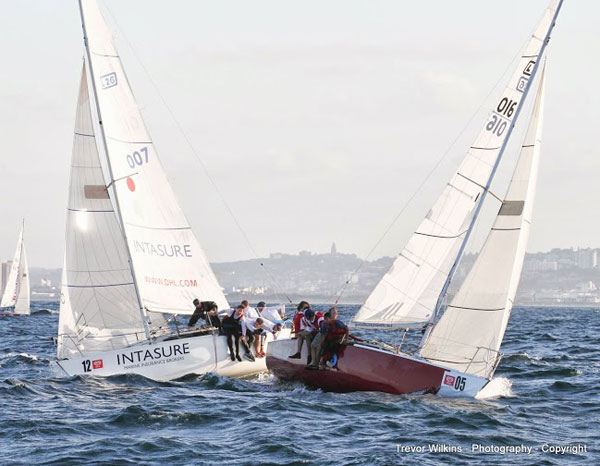 There was heartbreak and jubilation on the water Thursday, in race four of the Ola Lipton Challenge Cup offshore of Durban with Luke Wagner representing Durban Radio Boat Club clinching the win in a dramatic dash for the line.

“That was something else!” said an exhausted skipper, “My nerves are shattered! It was extremely stressful coming up to the line but we held on.” The Durban entry, Choose Life Element, finished 3seconds ahead of the False Bay Yacht Club’s Intasure FBYC Challenge.

“We had a dodgy start. We went right and it paid off for us and then just built on that. On the first beat Craig Millar was head of us and at the windward mark we managed to take him.”

“It is always easier to attack than defend. We held off a number of surges from Dre and Markus. If you are attacking, you get to spot the leaders mistakes. We made a few bad tacks but we worked to maintain our lead. It was an incredibly long race being in the front.”

Heading up to the finish, Wagner was neck and neck with Giovannini, “We were slightly overlapped right on the line, Dre slowed down to tack behind us and we held on for as long as possible. As we tacked now running parallel to the finish line, we thought that Dre would tack in front of us but he didn’t. We then turned across the line, as did Dre but we had the advantage and most of all the win.” a delighted Wagner stated.

This is the first win for the majority of the crew, with their helmsman having won two races in previous Liptons but the remainder ecstatic with their inaugural win. “I am thrilled; we are having an average regatta but proved that we can do it. It is the first time that we have sailed together and todays result is a good feeling amongst the guys!”

A tired Andrea Giovannini commented, “It was really tough out there, we had to fight our way back from being in seventh at one point. Our aim was to finish ahead of Point Yacht Club and we achieved this. Going into tomorrow there is only two points separating us so we are still very much in the running.”

For majority of the race, overall leader, Point Yacht Club’s Richard Weddell was lying in fourth. On the final beat they overtook Henley Midmar Dam’s Hoplite carving through the water for a fantastic third.

Weddell said, “I am tired. My hands are extremely sore but I could not have done it without my phenomenal team! We had a great race on the water. On the last beat, we knew which side was going to pay off so we had to get there fast. We managed to catch Dre and had some tacking duels with him. We got very close but on the final one came back on a slight header that didn’t give us the edge.”

The local lads continue to fly the Durban flag going into the final race being two points clear. “We are in a better position that this morning (Thursday), we had to worry about two boats and now we only have to worry about the one in the finale.”

‘Mr Lipton’, Greg Davis had a terrible day out on the water, coming in ninth. “Not much happened for us today. For most of the race, we weren’t in good shape. At one stage we were near PYC but hooked another bag, our pace slowed down drastically. On the third beat we were going agonisingly slow. I flossed about four times on the run. Finally we dislodged the bag that was stuck towards the end of our keel. On the final beat we increased our speed by half a knot, the boat felt faster.”

As the experienced team neared the finish line, disaster struck as they noticed a huge tear in the jib. “All in all, it wasn’t to be. We tried out best but are out of the running. All we can hope for is that Dre sails well tomorrow.”

The fleet of 18 yachts sailed a sausage course with four beats and three runs. The wind was a gentle 8knot breeze with calm winds but the North Easter built to close on 15knots as the race progressed with the waters turning into a bit of a washing machine.

An epic final is on the cards for the last day of the Ola Lipton Challenge Cup. Will Point Yacht Club’s Weddell hold onto the title and keep the event in our warm waters or will False Bay Yacht Club sail a brilliant race taking the title back down to the Cape?