You are here: Home / News / New Zealand gets FIFA Thumbs Up 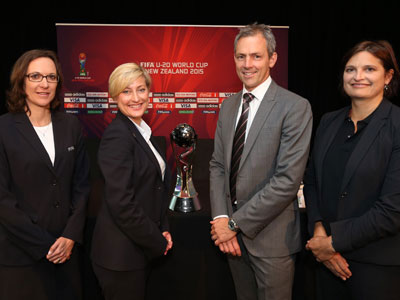 FIFA U-20 World Cup officials have given New Zealand their seal of approval as the country gears up to host one of the biggest sporting events on the planet.

A FIFA inspection team spent 10-days travelling the North and South Islands of New Zealand, assessing training venues and hotels in each of the seven host cities in preparation for when the highly-anticipated tournament comes to town on 30 May 2015.

The praise from Mayer-Vorfelder holds New Zealand in good stead considering this is the fifth edition of the FIFA U-20 Football World Cup that she will oversee. She also claimed this tournament will put New Zealand on a ‘platform’ for the world to see.

“New Zealand is a great country … we toured seven venues North to South and overall we are very impressed. Facilities are good, enthusiasm is great. We are positive it will be an excellent tournament from all perspectives,” Mayer-Vorfelder said at a press conference held in Auckland (14.03.14).

Most played sport
Although New Zealand is known as a predominantly rugby-mad nation, thanks to the heroics of the world-beating All Blacks, the FIFA U-20 Football World Cup will be the third FIFA tournament to be hosted in New Zealand.

Despite rugby’s popularity, football is the most participated in sport in New Zealand and the impending festival of football is expected to fill stadiums across the country with colour and a carnival atmosphere as a host of rising stars of the global game take to the field.

“New Zealanders will be overwhelmed by the standard and quality of football played in this tournament, it really is the launch pad of our next international footballing superstars and we would urge all sports fans not to miss out on seeing these players in action.”

“I was fortunate enough to see Lionel Messi play at this tournament only in 2005, and it is this calibre of player which fans in New Zealand will get to see live in 2015. Already I can feel the anticipation building across the country,” Mayer-Vorfelder added.

The FIFA U-20 Trophy was also on display in Auckland – the first time it has been allowed to tour a country so far in advance of the tournament. The finely-crafted trophy will embark on a whirlwind tour of New Zealand, stopping at over 40 towns, from 5 – 30 May 2014, concluding exactly one year before the tournament kicks off.

The press conference also highlighted ticket pricing for the tournament, with prices expected to be on the lower end of the spectrum in order to attract as many fans as possible to watch the beautiful game in one of the world’s most beautiful countries.

The FIFA U-20 World Cup New Zealand 2015 starts on 30 May 2015 and concludes on 20 June 2015. Matches will be played in seven host cities – Auckland, Christchurch, Dunedin, Hamilton, New Plymouth, Wellington and Whangarei,

Broadcast to more than 1000 countries, with a global reach of around 170 million people, the FIFA U-20 World Cup will also help promote New Zealand to the world. Around 10,000 international football fans are expected to travel to the New Zealand in support of their team.

The match schedule will see four pool games played in two of the seven host cities daily – with plenty of double-header football action to whet the sporting appetite. New Zealand will also host the ICC Cricket World Cup in 2015 adding to the list of major sporting tournaments held in the country in recent years.